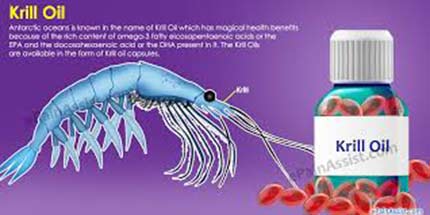 Krill oil is a type of oil extracted from the a small crustacean called krill. Krill oil is now widely available in supplemental tablet forms. Krill oil is better alternative compared to standard fish oil. Standard fish oils are made from fishes that contains a high level of mercury. The omega 3 fat that is derived from krill oil is believed to be the purest in the world as it does not have industrial toxins found  in other fish oils.

One of the benefits of using krill oil is that it can improve your heart health and prevent cardiovascular related diseases. Survey shows that krill oil has the ability to reduce the CRP level in the blood. The lower the CRP level, the healthier your heart will be.Regular consumption of krill oil can increase the level of good cholesterol called high density lipoprotein (HDL) as well as reducing the level of bad cholesterol called low density lipoprotein (LDL) in the blood system. You only need to take 500 mg of krill oil every day can improve your heart health significantly. It is rich with omega 3 and can prevent blood clots in your arteries.

Krill oil acts as a powerful anti inflammatory and can reduce the inflammation in your body. The omega 3 in krill oil can be converted into eicosanoids to encourage the production of a type of hormone called prostaglandins. The krill oil can relieve inflammation on the joints by lubricating it. Taking krill oil frequently allows you to experience lesser joint stiffness and be able to move around without feeling pain.

Krill oil has the ability to improve the sharpness of your mind and give you the ability to concentrate for a more lengthy period. It also enable you to have better memory so that you won’t easily forget things. The omega 3 fat from the krill oil called docosahexaenoic acid (DHA) can enhance the expansion of gray matter in the brain. The DHA can improve the functionality of cell membranes and gray matter tissues in the brain. Insufficient intake of the omega 3 fat can prevent the brain from functioning properly and cause brain degeneration.

Krill oil can reduce the symptoms of PMS in women that are menstruating. It can alleviate the abdominal discomfort that you experience when you are having a menstrual period. It can reduce the mood swings problem by improving the corticotropin hormones. It helps you to fight off depression by increasing the level of dopamine and serotonin. There is not yet any confirmed findings from scientists as to whether krill oil can reduce PMS symptoms.

If you are pregnant, you should take an adequate supply of krill oil as it is beneficial for the neurological development of your fetus. Krill oil ensures healthy development of the nervous system, brain and eyes of the fetus. The cerebral cortex is consists of 15-20% of DHA. The retina contains 30 -60% of DHA. It can improve your child’s intelligence level. It can prevent brain related injuries from happening on your baby including autism, and ADHD.

Krill oil is rich in a type of antioxidant called astaxanthin that can fight against the free radicals that cause skin problems. The anti-inflammatory property can calm down the break out of acne and help your wound to heal at a faster rate. Consuming krill oil can boost the immune system and help your body to get rid of the germs that cause acne problems on your skin. If you have scars, eating krill oil can help to heal the scars speedily. Krill oil has a lot of vitamin A and E which are essential for a glowing skin.